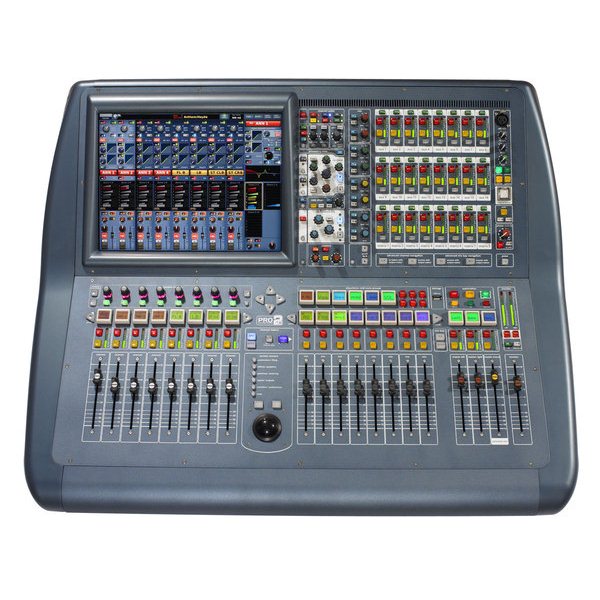 The MIDAS PRO2 and PRO2C may be the smallest and least expensive MIDAS digital consoles so far; however, they represent a quantum leap forward in both technology and in concept for the art of audio mixing.

By entering into this hire agreement you are accepting our Terms and Conditions of the Hire upon receipt of goods and/or services from SBS Audio Visual.

Receipt includes arrival of equipment and/or staff on an event site, whether the customer is present or not. All equipment hired remains the property of SBS Audio Visual Ltd at all times.

Payment by the Customer on time under the Contract is an essential condition of the Contract. Payment shall not be deemed to be made until SBS Audio Visual has received either cash or cleared funds in respect of the full amount outstanding. If the Customer fails to make any payment in full on the due date we may charge the Customer interest on the amount unpaid at the rate of 8% implied by law under the Late Payment of Commercial Debts (Interest) Act 1998.

The Customer shall pay all sums due to the Supplier under this Contract without any set-off, deduction, counterclaim and/or any other withholding of monies.

The Hirer accepts all liability & responsibility in respect of & shall & completely indemnify SBS Audio Visual against all third party claims & losses howsoever arising in respect of damage to or loss or destruction of any property or in respect of the personal injury or death of anybody in any way caused by or relating to the equipment or its use.

The MIX8 is seriously compact and portable, so that you can chuck it in a bag with all your live recording gear and travel light if you're constantly on the move.Here's what Mackie say about the Mix series:Mackie Mix Compact Mixers deliver the quality you expect from the world leader in compact mixer design. The professional and affordable Mix Series...

The Allen and Heath AR0804 Expander AudioRack for GLD system offers 8 XLR inputs and 4 XLR outputs to provide exceptional control and versatility even when working on the most demanding audio tasks. With full integration with the GLD 80 mixing desk and system, the AR0804 allows you to expand your current system to create the ultimate audio workstation.

AR2412 is a 24 XLR input, 12 XLR output AudioRack. Adding an AR2412 to your Qu system lets you position some or all of your I/O up to 120m from the Qu mixer, connected over a single Cat5 cable running Allen & Heaths dSNAKE protocol. dSNAKE provides control to the remote preamp, and all mic preamps are scene recallable. AR2412 also includes a Monitor... 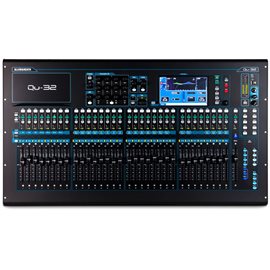 Now in a feature-packed new Chrome Edition, Qu-32 reshapes digital mixing, combining innovative design and exceptional functionality to create a superb professional mixing experience. Bristling with all the features you’d expect from a top of the range digital console and incorporating technologies pioneered on the GLD and iLive digital mixing systems,... 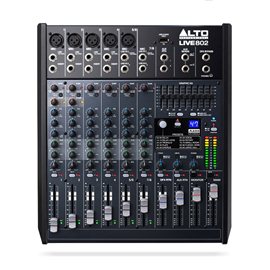 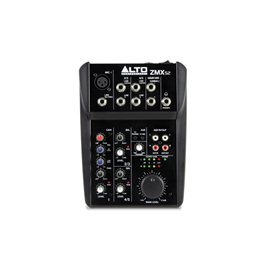 The Alto Zephyr ZMX52 5 Channel Compact Mixer offers all the essential inputs, outputs and EQ for a DJ, an acoustic solo act or a singer with a backing track on a CD/MP3 player. This miniature mixer is great for anyone who needs stereo line inputs plus one mic. This condensed and ultra-portable mixer is quick and easy to set up and won't take up too much... 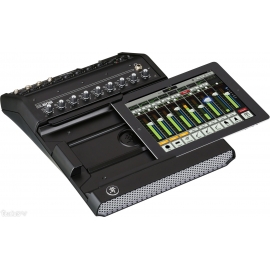 The DL806 is the first 8-channel mixer with complete iPad control, delivering the rock-solid results that professionals demand due to the proven performance of Mackie Onyx mic preamps, the uncompromising quality of Cirrus Logic converters and all the right inputs and outputs. Please note: This model of the Mackie DL806 is compatible with lightning... 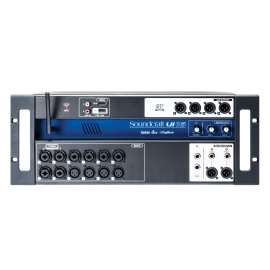 The Soundcraft Ui16 is a Tablet/PC/Smartphone controlled digital mixer that connects via integrated Wi-Fi, compatible with all operating systems iOS, Android, Windows, Mac OS and Linux. This compact, road-rugged digital mixing system packs 16 input channels and 3 dedicated award-winning Lexicon effects processors into a fully portable unit, so you can mix... 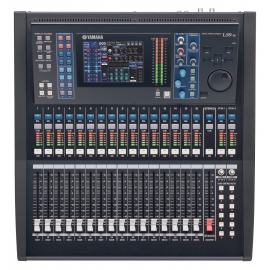 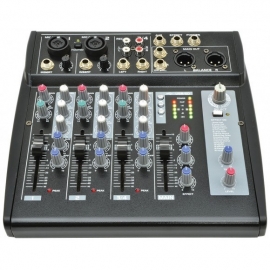 Compact format mixing console with mic/line inputs (combo) and a stereo line channel which can be fed from an internal USB/SD audio player. Mic/line channels have individual inserts and all channels have 3-band EQ, Aux and EFF controls for the internal DSP effects. Phantom power (+48V) is switchable to the XLR inputs for condenser microphones. A small yet... 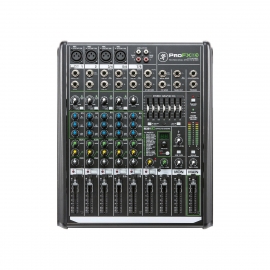 The Pro FX series features the most comprehensive mixers for small to medium gigs. They feature everything you might need including inserts on the mic channels for compressors or gates, 3 band EQ and low cut on the 8 main channels, overall 7-band EQ for the mains, and built in effects so you don't have to worry about external FX units to get that... 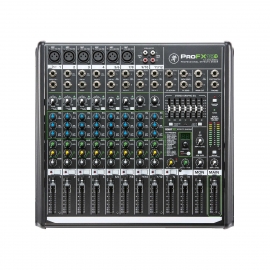 The Mackie ProFX12v2 is a robust and versatile 12 channel mixer that features a range of innovative effects and connections to provide a comprehensive mixing console. With six powerful and transparent Vita microphone preamps, 16 built in digital effects, 7-band graphic master eq and 3-band eq per channel and USB connectivity the ProFX12v2 delivers premium... 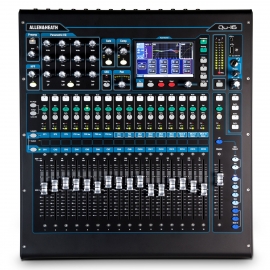 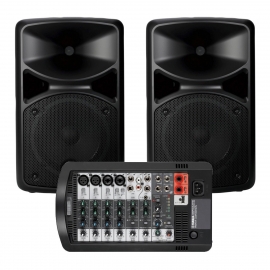 Ultimate Portability Compact and light enough to carry by hand, the Yamaha Stagepas is an all-in-one PA system that you can take literally anywhere. One speaker features a convenient storage compartment for cables and other accessories, while the other houses the detachable 8-channel mixer, which combine together into an attractive, compact package that...

The Allen and Heath SQ-5 is a professional live mixer with a feature set that's the perfect choice for the most demanding situations; from AV and corporate events to live productions and houses of worship. It also comes with an in-built 32x32 96kHz audio interface for full multi-track recording. The simple and intuitive layout of the mixer and a high-res...

The S5000 is a medium-sized control surface for the dLive MixRack, with the addition of built-in audio I/O and audio networking ports. It features 28 faders over 6 layers, dual 12″ capacitive touchscreens and the innovative Harmony UI for the fastest workflow in the industry. Desk layout and workflow is intuitive and clear. Touchscreen usability is...

The MixRack is the heart of any dLive system. It houses the XCVI processing core complete with audio I/O, control and audio networking ports. It is typically connected to a dLive Surface, but can also be controlled at the same time as or even without a Surface using a laptop or iPad, Allen & Heath IP remotes or third party controllers via TCP/IP....